The Special Collections within the Library Services broken down into different themes. 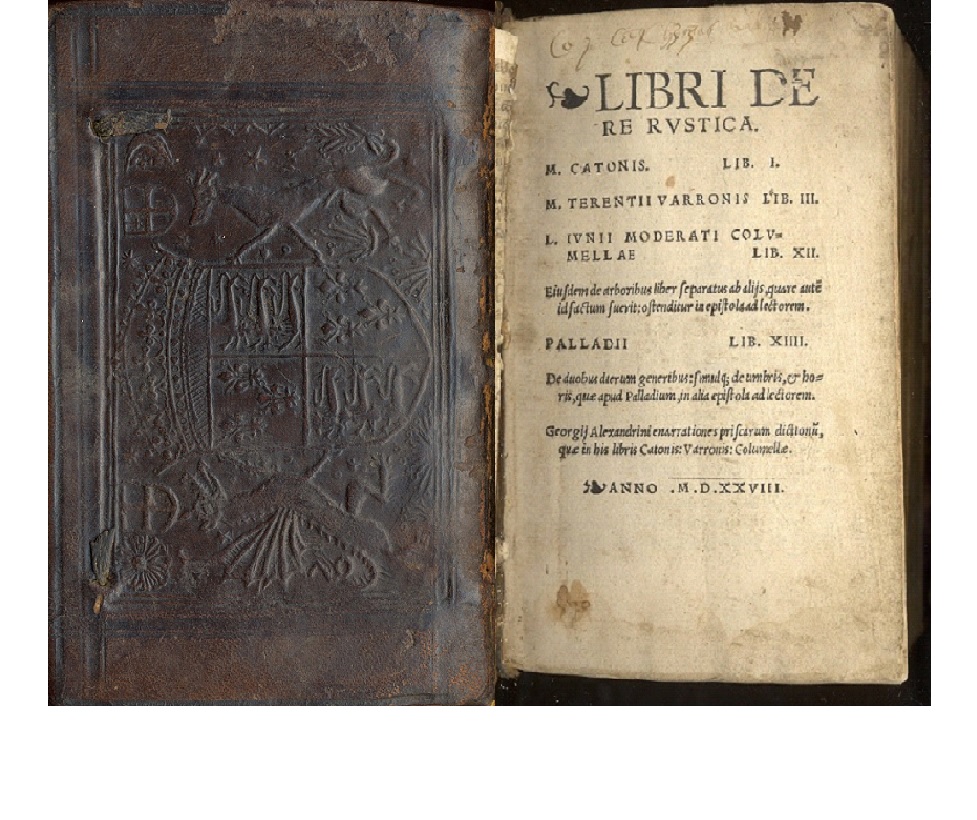 This book is part of the Harsnett Collection, a library of books that was the property of Samuel Harsnett, Archbishop of York between 1629 and 1631. Most of the volumes in the collection are on religious subjects, but there are some exceptions. Libri de re rustica (book of country affairs) contains writings on agriculture by four leading classical authors, Marcus Porcius Cato (234-149 BC), Marcus Terentius Varro (116-27 BC), Lucius Junius Moderatus Columella and Palladio. This edition was published in 1528 and is bound in leather. The armorial (heraldic design) on the front and back covers suggests that the book may have been part of the library of King Henry VIII. 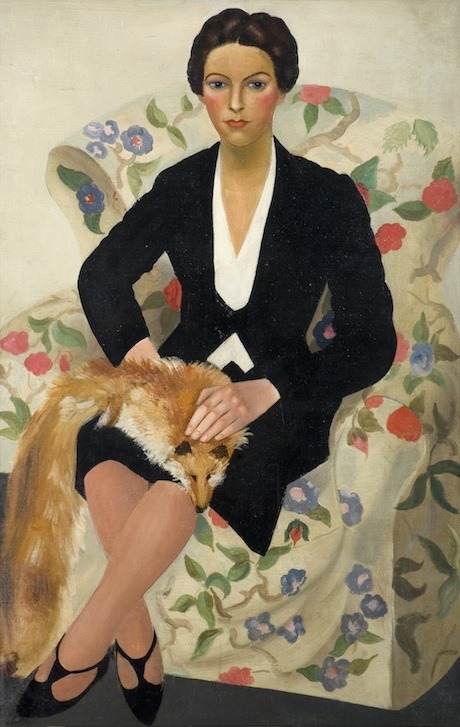 This portrait was painted by Christopher Wood (1901-1930) a British artist who trained in Paris. The sitter is Jeanne Bourgoint, a friend and lover of Wood's, whose relationship with her brother Jean inspired Jean Cocteau's Les Enfants Terribles. On his return to England, Wood became a member of the London Group and the Seven and Five Society, and exhibited work with Ben and Winifred Nicholson. Following a visit to Cornwall, Wood became inspired by the landscape painter Alfred Wallis, whose naïve style influenced Wood's later work. The portrait is an important piece of the University Art Collection and was donated by the founder of the collection, H.S. (Jim) Ede, who founded the Kettle's Yard gallery in Cambridge 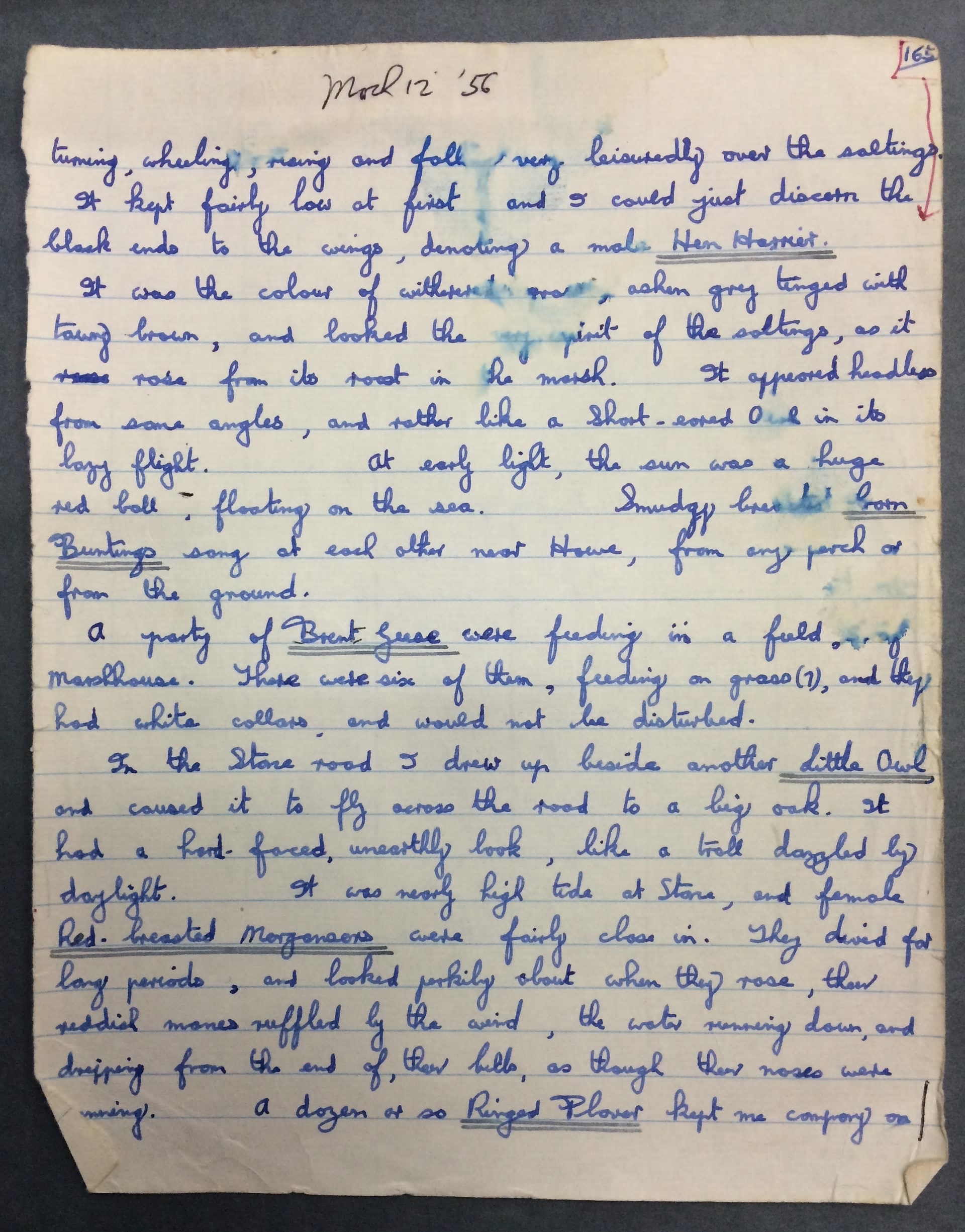 This page is from a diary belonging to the ornithologist and writer J.A. Baker (1926-1987) author of The Peregrine. Baker observed the bird life of East Anglia and recorded his findings in notebooks and dairies while in the field (this page shows spots where rain has caused the ink to run.) The Peregrine, published in 1967, was a ground-breaking work of nature writing which drew attention to the plight of birds of prey, many species of which were on the verge of extinction at that time. As well as notebooks, the J.A. Baker archive contains manuscripts, maps, correspondence and optical artefacts.

Henri Gaudier-Brzeska (1891-1915) was a French artist and sculptor. Henri Gaudier studied business before becoming a sculptor. In 1910 he met and began a relationship with the Polish writer Sophie Brzeska and the couple later moved to London from France, using the name Gaudier-Brzeska. After working in figurative sculpture, Henri's style became more abstract following the influence and advice Joseph Epstein. He joined the vorticist group, led by Wyndham Lewis, and the group's philosophy of abstraction and mechanisation informed his work. Henri Gaudier-Brzeska was killed in action on the Western Front in 1915. The Gaudier-Brzeska collection contains letters from Henri to Sophie (many of them illustrated,) original artworks and diaries and unpublished writings of Sophie Gaudier-Brzeska. The collection was donated by H.S. (Jim) Ede, founder donor of the University Art Collection

John Hassall (1868-1948) was an artist, illustrator and cartoonist. Shown here is one of his designs for a magazine cover: the Christmas edition of Ideas for 1911. Hassall's work ranged from book illustrations to commercial posters and advertisements, to cartoons. One of his most famous commissions was for the London North Eastern Railway; a poster showing a fisherman skipping along a beach, with the caption "Skegness is SO bracing!" The Hassall Collection includes original artworks, sketchbooks, letters and diaries, and books with Hassall covers and illustrations.

Jacket illustration for The Crime at Black Dudley

This illustration is for the dust jacket of The Crime at Black Dudley, by Margery Allingham (1904-1966.) The novel, which was first published in 1929, was the first to feature the detective Albert Campion, who is her most famous creation. The jacket, designed by the artist Philip Youngman Carter, Allingham's husband, is part of the Allingham Collection an archive of Margery Allingham's life and works. The collection includes manuscripts, proofs, diaries, notebooks, photographs, artworks and artefacts, including a prop from a film version of The Tiger in the Smoke (widely held to be her finest novel) and awards. The collection was placed on permanent deposit in the Library by the Margery Allingham Society, which is dedicated to preserving and promoting the literary work and reputation of the author